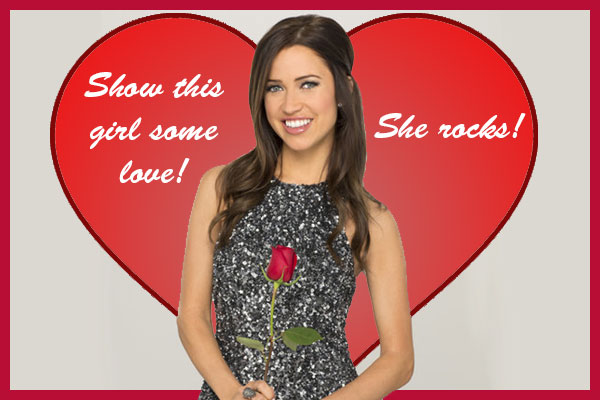 There’s a lot I could say about tonight’s episode. There were Ian’s TWO awkward apologies on bended knee, neither of which I bought. There was Clint’s somewhat redeeming statement that Kaitlyn did the right thing by letting Nick on the show. And we finally found out that the off-camera time Kaitlyn spent with Ben H. and Shawn was unsanctioned. She somehow managed to elude production and spend six full hours talking with Ben and Shawn with no mics and no cameras, unprecedented in Bachelor/ette history as far as I know.

Ben H. is a shoe-in for the next Bachelor. Ben Z. is the backup.

But none of that really matters in light of what Kaitlyn revealed about how maliciously she has been attacked since the show started airing and admitted to having been subject to death threats because of her choice to sleep with Nick before the fantasy suites. Here are three sample messages she received on social media:

“You’re the worst Bachelorette ever in history. You’re a little #whore so shut your little whore mouth. #slut”

“Kaitlyn, you need to unspread your whore legs and shut your f*cking filthy diseased mouth and f*ck off.”

“Kaitlyn is a selfish whore with no morals and a pathetic excuse for a human being!! She should just crawl in a hole and die… I hope fans break her spirit so that our kids can see that whoring behavior isn’t rewarded… I can’t wait to see Kaitlyn cry like a little BITCH. She’s a dirty whore who treats people like sh*t!!!”

What is filthy and diseased is a westernized nation in the 21st century who thinks it’s appropriate to treat other human beings this way.

There are other issues involved here. There’s the gender-role issue. Obviously, if Kaitlyn were a man, she wouldn’t be enduring this kind of treatment. The whole damn country thought Juan Pablo screwed Claire in the ocean and not only did no one say boo about him doing it, but Claire got slut-shamed for something she didn’t even DO. They made out in the ocean. They didn’t have sex.

There’s also outright stupidity involved. All of Bachelor/ette nation knows that Andi f*cked Nick and Josh during her fantasy suite time with them last year. So because Kaitlyn slept with Nick a couple of weeks before the fantasy suite, that makes her a whore and a slut? She still slept with exactly the same number of guys Andi did. It’s just she did it before the predetermined time allotted for f*cking on an insipid reality show and she’s not ashamed of it so the puritanical, hypocritical nitwits of this nation decided to shame her since she won’t shame herself.

That last quote above was from a mother, a woman who is raising our country’s future generation. Perish the thought. How she can claim the moral high ground and spew such hate is beyond me.

But that’s what we’ve come to as a society. It’s become acceptable to bash and insult and threaten and shame people on social media. I’m not going to sit here and pretend I haven’t mocked people on this show and questioned their judgment but I don’t HATE anyone on the show. I don’t even know them. All I know are the edits they got on the show and those edits are deliberately skewed to illicit emotional reactions out of the viewers.

But even if one of the guys on the show were as horrible as his edit portrayed him to be, I would never go so far as to seek him out and subject him to the unconscionable verbal torture that the people who wrote those messages to Kaitlyn did. I am jaded and snarky and I have been harsh with people on the show who appeared to sink themselves by giving into their insecurities and viciously projecting them onto Kaitlyn or the other guys. And maybe not saying it to their faces doesn’t give me the moral high ground either but I know what those people wrote to Kaitlyn was very, very wrong and it’s symptomatic of a larger issue facing our culture: we’ve lost our empathy, we’ve gone past apathy, and we’ve arrived at antipathy.

In short, we’ve lost our moral compass and are giving our souls over to the devil. Read those words that were directed at Kaitlyn again and tell me you couldn’t see them flying out of the mouth of a possessed Linda Blair. They’re nothing short of evil and it appears this nation may be in desperate need of an exorcism.

So, I’m not going to be snarky tonight. I’m just going to open my heart and embrace the entire cast of this season of The Bachelorette, especially Kaitlyn, who isn’t perfect (because no one is) but who is admirable and brave for letting us share her pitfalls and triumphs on her quest for love and paving the way for women by publicly and unabashedly admitting SHE LIKES SEX. Get over it, America.

Thanks for reading my Bachelorette 2015 recap. Here are some other links I think you’ll enjoy:

See you next week for the finale!