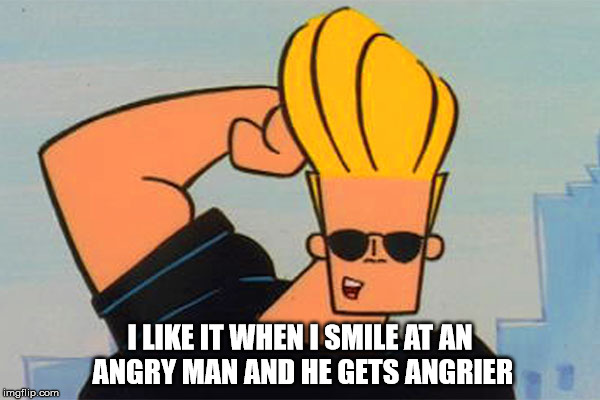 …results in exactly f*cking nothing as it usually does.

The Lee and Kenny drama comes to an end without the bloodshed we’ve been teased with all season. Well, that’s a shock.

Rachel says she isn’t ready to give Kenny the rose but she’s definitely ready to give Lee the boot. She and Kenny walk to the helicopter to leave Lee stranded in the icy woods but it’s not enough for Kenny. He needs to have the last word.

He leaves Rachel in the helicopter and goes back to talk to Lee.

Rachel is not amused.

And what exactly was this monumental message Kenny needed to impart to Lee? That somewhere deep inside of Lee, there’s a decent Lee and someday it will come out?

No, Kenny. There is no decent Lee. He doesn’t even care that Rachel cut him. He just wanted to get on TV and f*ck with people and that’s exactly what he got. So Lee wins despite losing and you lose despite winning.

It was all so unnecessary.

Despite Rachel’s frustration with Kenny, she likes him and trusts him enough to give him another chance. He eventually gets the date rose.

Kenny, Bryan, and Will have roses.

Josiah and Anthony go home. Josiah’s exit speech is hilarious and actually pretty accurate in questioning how Rachel thinks she’s ever gonna make it with Adam or Matt. I knew he was going home though after his bizarre interaction with Rachel on the group date.

What really mystifies me is how the hell Anthony went home before Adam or Matt. Adam and Matt are filler. They’ve had no airtime and have played no roles in the season’s storylines. And not only do they make it to the final 9, unseating Anthony who was actually a respectable option for Rachel, but they also make it to final 6, unseating Kenny, Alex, and Will. Seriously, WILL? Will was probably the best option Rachel had and HE goes home before Matt and Adam???

I seriously question Rachel’s judgment when it comes to men.

Rachel does an advertisement for the hotel they’re staying in in Copenhagen by letting us know that it has a view of the castle that inspired Shakespeare to write Hamlet.

Fascinating. I just booked my reservation. 🙄

Eric’s One-On-One
(AKA You can quit your bitching.)

Eric’s insecurities magically dissipate when he is finally granted the one-on-one he’s been complaining about not getting since he set foot in the Bachelor mansion. Insecurities like his will never go away permanently though. He will always need more and more and more acknowledgement and reassurance until he grows the f*ck up and seeks therapy.

Literally, the only interesting thing that happens on the date is that Eric and Rachel get flashed by a Danish streaker while hot tubbing on the main canal that runs through Copenhagen.

I have nothing else to report about this date other than that I have no idea what Rachel sees in Eric. He is “nice” but nothing more.