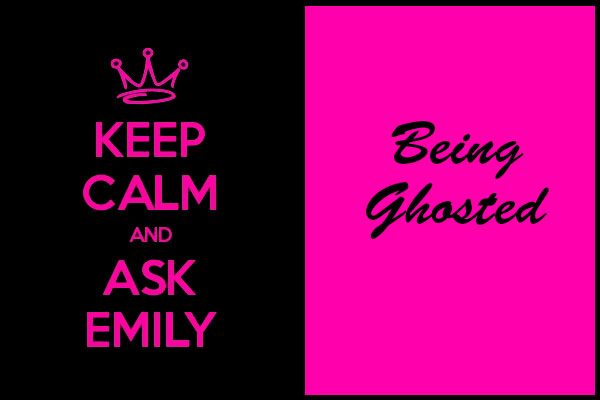 Ask Emily: Advice on Being Ghosted

Ask Emily: Advice on Being Ghosted

Hey, guys. Here is my official first Ask Emily email. It’s something to read until I get it together with the Women Tell All blog which I’m working on right now. Today or Sunday it will be up.

I am separated and will hopefully be divorced in the very near future. I started dating about 4 months ago. I am 57 and have had a handful of dates. None that I was really interested until a recent guy.

We went out 4 times over 3 weeks and he was texting and calling me daily. It was not too much and not too little .  I was very attracted to him and it seemed reciprocated.  There was a lot of sexual tension , but I was not ready to take that step and came across very upright. I became very guarded because I hadn’t felt that way in a long time , and quite frankly I felt like a school girl around him. Some information he revealed about himself and his prior marriage caused me to become even more protective all the while really liking how he made me feel.

Anyway, long story short we went from communicating every day to nothing.  I texted him and asked him if I offended him in any way. I received no response.  I am having a hard time getting him out of my head and I keep looking for the reason why he couldn’t just tell me like a man.  There is obviously more in play here, but not sure how much you want me to text.

I definitely felt like he wanted sex and I was not giving him the green light . In fact, I probably held back a lot more than I normally would have in small nuances because I was afraid .  My husband was a multiple time adulterer. I love sex, but I would like to get to really know someone and trust them before I give myself away.  I need to know if I should express to him why I was holding back (it would have to be in a text ) or just forget him.

Thanks for writing me. Unlike a usual advice column, we can keep writing if you need to. Sometimes it helps to hash out the things in our head with someone else so we’re not a big ball of worry with no way to let the worry out.

First, I’m sorry to hear about your impending divorce and your cheating ex-husband. I don’t know how long you were together but if it was a very long-term relationship, I can see the situation making you feel like your world was turned upside down. Everyone reacts differently though and no two relationships are the same. A cheating husband could make one person feel utterly heartbroken and betrayed and another feeling relieved if they felt trapped in a loveless marriage.

If your world was turned upside down, I hope you had time to grieve the loss of your marriage before jumping into dating. Sometimes that’s easier said than done though. Such situations can leave us feeling abandoned and in need of comfort, companionship, and love. Sometimes rebound relationships are a necessity. I’m not implying that you’re rebounding but a lot of people do after long-term relationships end because being alone with our pain is just too difficult to endure. We need to be able to ease back into being independent.

As for the new guy ghosting you, you haven’t done anything wrong. It’s natural to feel guarded after being betrayed and just in general when entering a potential new relationship. Without knowing what he revealed about his previous marriage, it’s hard for me to gauge if your fears are necessary or not but most people don’t take red flags seriously enough when they are very attracted to someone. So if things the new guy said to you about his previous marriage raised red flags, your instincts are probably right.

The fact that he stopped contacting you makes it even more likely that he is not a good match for you. A man who genuinely cares about you would have had the decency to at least let you know that he didn’t feel like the two of you were a good fit. But if he were going to be someone you would be able to have a happy relationship with, he would not have left because you didn’t want to have sex right away.

It’s perfectly normal to want to get to know someone before going to bed with them. Sex has become looked upon as something casual to a lot of people in modern times but the reality is that many people rush into it out of a sense that it’s something they should be doing rather than something they want to be doing.

Sex is more than a physical act for most people, even men though most would rather die than admit that emotionless sex is just not as good as sex with someone their emotionally connected to. Ideally, sex should be emotionally intimate and be a natural extension of the emotional bond you already feel with another human being. It requires time to build the trust and positive emotions to create that bond. How much time depends on the people involved but a partner who cares for you and wants you in their life will wait for you to feel ready.

I don’t know how old the guy is who ghosted you but if he’s around your age there’s simply no excuse for him dropping you like a hot potato without explanation. It sounds to me like he’s very immature and you probably dodged a bullet.

If he has already ignored your requests for an explanation, I see no reason to contact him further with explanations of your behavior. Someone worth your time doesn’t need you to explain why you didn’t give it up on your 5th date or if it made him feel rejected, should have at least had the courtesy and maturity to ask you why you weren’t giving him the “green light”.

My advice to you is that you forget him. There are other people in the world you will find attractive and will find you attractive. You don’t have to settle for a man in his 50s who hasn’t learned how to communicate and needs a woman to have sex with him in order to be worthwhile to him.

If you’re having a hard time letting him go in your mind, I suggest doing some self-affirmation and gratitude exercises. Remind yourself that you are lovable and should be treated with love and care NOT disrespect and disregard and take time out every day to focus on the positive things in your life that you value. It can be hard to do but both practices have been scientifically proven to improve mood and general life satisfaction. They help get your brain out of broken record mode that causes anxious thoughts to swirl around in your mind.

I hope this helps. If you have more details you want to share that you think are pertinent, feel free to write me again.

We did correspond a couple more times back and forth but this was the initial question and response. I’m behind on getting back to her as I am with so many other things. So if you’re reading, Ghosted, I haven’t forgotten about you!

If you would like advice about something you’re struggling with in your life, feel free to contact me.

2 thoughts on “Ask Emily: Being Ghosted”