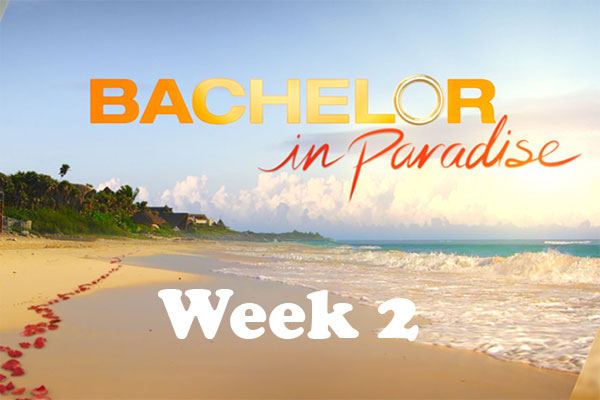 I honestly wasn’t going to blog about Bachelor In Paradise even though I do watch it because it didn’t seem like anyone was reading. But I got a bump in visits to my blog last Tuesday even though I didn’t write anything so even though no one’s commenting, there are a few people reading. I live to serve so here’s your week 2 recap.

DISCLAIMER: The Bachelor/ette franchise which includes Bachelor In Paradise and Bachelor Pad is a reality-based series of television programs. Such shows are often scripted and edited to manipulate the audience into reacting in a specific way and to tell a story that the shows’ participants may not be fully aware of. The individuals on such shows spend hours in front of cameras and are prompted by producers until they give answers and emotional reactions that fit the shows’ story lines.  As a result of this manipulation of participants and story lines by producers of reality television, the participants of such shows may be very different in REAL reality than they appear on reality television.

In an effort to be fair to these people without undermining my ability to poke fun at these shows, I am letting my audience know upfront that I do not mock the participants of the shows but the characters they are crafted into by the producers and editors of reality TV. I bare no genuine ill will toward any reality show participant and I do not condone cyber abuse of any individual, period, let alone cyber abuse due to the inaccurate public perception of an individual based on their appearance on reality television.

I will be posting that disclaimer on all of my future blogs because I think it’s important not to confuse the participants of these shows with what is shown of them on TV. I am still appalled by the cruel treatment Kaitlyn Bristowe in particular received as a result of her stint as The Bachelorette.

NOW, on to the recap:

I didn’t write a recap last week so I’ll give a brief summary of what’s happened so far on the show.

Last week, the girls got the date cards and the guys got to hand out roses which means there were more girls than guys who showed up. Last week’s participants were:

Ashley I. is Lauren’s older sister and decided to drag her younger sister with her – or so we were supposed to believe. Production screened her prior to her appearance on the show. It was planned ahead of time so the pretense that Chris Harrison and the other contestants didn’t know she’d be on the show is completely false as was the pretense that Ashley bringing her sister was “unfair”.

The solid couples after the first week were:

The weak couples after the first week were:

Lauren got through to week two because she and her sister are a package deal. If one gets a rose, the other gets to stay.

Jillian was the odd woman out at the end of the rose ceremony and went home.

First, what’s with the cheesy 80s opening to Bachelor In Paradise? So unnecessary and not nearly as clever as I’m sure the producers wanted it to be. We already know the show’s a big joke. We didn’t need the exclamation point on the end. I love the font they use for the titles too. Cooper Black in case you don’t know. For example:

I don’t think I’m the only one who wishes Ashley I. had left her sister, Lauren, at home. She does nothing but complain and makes obnoxious Ashley seem downright pleasant. Both of them cry whenever the wind changes direction but at least Ashley isn’t bitching about how unfair everything is and how much she hates the show all the time. I can’t wait until Lauren goes home and it seems like that’ll be soon since she’s not going to stay unless Joshua from Kaitlyn’s season (the guy who let Kaitlyn shave off half his hair in a contrived trust exercise) shows up ASAP.

Ashley has managed to convince Lauren Joshua, the welder from Idaho, is her Rich Kids of Beverly Hills soulmate. So now she’s just praying he shows up which, of course, he will because I’m pretty sure all the contestants get talked up about so-and-so who was on so-and-so’s season who’d be perfect for them.

The contestants on Bachelor In Paradise never seem to want anyone but someone who’s either there or is going to show up. Coincidence? Are we really that stupid?

There are a lot of warning signs in Spanish around the Bachelor/ette Pad warning of crabs. I wonder which kind.

Dan tries to convince Carly that some of the crabs that actually do seem to skitter under foot a lot can fly. She looks at him skeptically. At least I think she does. It’s hard to tell with her new industrial strength eyebrows.

Carly caught a lot of flack on Chris’s season for two reasons: She was really mean to Britt and her eyebrows were plucked into virtual non-existence. I guess she got the hint because now she seems to be overcompensating: 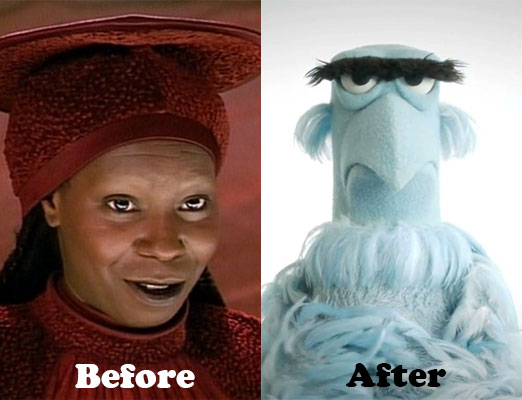 In case anyone doesn’t know who the above characters are, that’s Guinan from Star Trek Next Generation on the left and Sam the Eagle from the Muppets on the right.

I know Carly has hypothyroidism and I know it’s hard for her to grow eyebrows on her own and I feel bad even saying anything but it’s just comical that she went from having no eyebrows to cartoon eyebrows (a la Jenna Marbles in “How to Trick People into Thinking You’re Really Good Looking”) since we saw her in February (March?).

Carly, darling, there has to be a middle ground. As an eyebrow challenged person myself, I can assure you there are a vast variety of pencils, powders, and colors you can use to create fantastic natural looking brows.

We find out a couple of mildly interesting things:

1) Despite all attempts to convince Mikey that Clare isn’t that into him, he remains deluded about it.

2) Lauren is a “mistress”. No she isn’t sleeping with a married man. She’s sleeping with a guy who has a girlfriend. Does that really make her a mistress? Is she a kept woman who’s generously compensated with clothes, jewels, and an apartment for opening her legs whenever her lover’s frigid wife is too busy planning tea parties and attending fittings and galas to fulfill her wifely duty or is Lauren what is colloquially known as a booty call? You be the judge.

And she’s definitely the picture of grace. In an ITM she is seen blowing her nose for a longer than usual period of time and comments on it stating, “So many boogers. I can’t even get them all out.”

In the nick of time, Joshua from Kaitlyn’s season arrives with a date card. To try to keep her sister in Paradise, Ashley I. immediately steals him away and lets him know Lauren has a huge crush on him and it’d be really great if he asked her out.

Joshua has only been in Paradise a matter of seconds at this point so he’s not quite ready to throw his first one-on-one in this franchise away without getting a look at all Paradise has to offer.

Tenley and Josh hit it off right away (uh oh) but Josh gives Lauren a chance. Wise beyond her 24 years, Lauren promptly tries to impress her prince charming by complaining about all the STD testing she (and all the contestants) had to endure before going on the show. Way to remind him that sex is something fun and he should want to do with YOU.

And the fact that she reveals she was tested only proves that she did not just “show up” with Ashley I. She had to go through a rigorous screening process just like anyone else who goes on one of these shows.

Lauren is ready to go home. She packs her bags. She’s crying again: “I don’t know why this world is so awful to me.” Probably because you’re awful. I think somebody needs a nap.

Lauren leaves unceremoniously. People either don’t care or are relieved.

J.J. is very annoyed that Josh is taking Tenley out but tries to hide his vast array of insecurities by mocking Josh: “If Joshua is a catch, he’s a carp. He was drudging the ocean floor but yeah, you caught him…” J.J., did you really just accuse Josh of being a bottom feeder? Pot meet kettle. “…Tenley’s kind of like a princess in a Disney movie and I’ve never seen a Disney movie where the blacksmith ends up with the girl.” But you’ve seen a Disney movie where the princess ends up with an unemployed single dad who was forced to move back into his parents’ basement because he cheated on his now ex-wife?

Joe from Kaitlyn’s season shows up with a date card. For some reason, everyone is expecting Joe to be the life of the party. Maybe he was the life of the party before he knew what it meant to be on one of these shows. Maybe he didn’t like the edit he got on The Bachelorette and now he’s contractually obligated to show up to Bachelor In Paradise but he’s not happy about it. Just a theory.

But everyone comments on how awkward he is and what a disappointment his presence is. Clare bares the brunt of Joe’s irritation over his unkind reception when he perceives her laughing at him: “This is like what? Your second Paradise? That’s terrible.” Oooo. SLAM! Poor Clare.

If you witnessed any of Clare’s three appearances on this show you know she’s an extremely emotional person. She’s visibly upset and wanders off by herself… to talk to a racoon. They started this gag on Juan Pablo’s season. It’s so stupid because it’s obviously fake but they keep doing it. Basically, Clare is seen talking to someone off-camera (probably a producer) and then they cut in shots of a racoon wandering around to make it seem like Clare is actually talking to it. Movie magic pro tip: If you’re on screen by yourself, the editors can make it look like you’re talking to the Dalai Llama if they want to.

This racoon is special though because production has given him a wine bottle and they film him trying to drink out of it. The message: Even a racoon needs to get drunk to endure Clare’s neurotic whining. I happen to like Clare so screw off, Bachelor In Paradise.

Meanwhile, Joe continues to make a bad impression. He doesn’t seem to be into anyone in the group and his date card said something about horseback riding so he asks the group if anyone wants to go horseback riding. Juelia jumps at the chance.

Next there’s this big debate over whether or not Joe actually asked her out. He didn’t. He asked if ANYONE wanted to go horseback riding and Juelia said she wanted to. End of debate.

Jonathan is upset that Juelia is going out with Joe because he’s put all his eggs in one basket (He did that with Britt too). It doesn’t really matter though, Johny. No one’s going to go for you because once again you are the season’s token black character. It’s not right but it is.

Next: Joshua and Tenley’s date