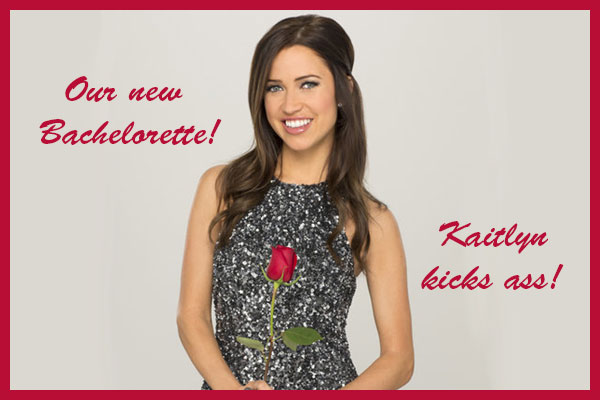 Tuesday night saw the conclusion of the season 11 Bachelorette premiere and it’s official: Kaitlyn is our new Bachelorette! Yay!

I’m excited. Now I have someone to root for which is going to make this season a lot more interesting for me.

This is how it went down.

Chris Harrison goes into the backyard to find the girls to announce the winner of the rose tally. He finds Britt first and gives her the bad news that she’s not the Bachelorette. Britt is clearly devastated and at a loss for words.

I do feel for her and it was sad to watch her crying in the limo but when she says things like, “I didn’t see that coming,” it really makes it hard for me to like her. How could she have not seen it coming? Did she not realize that there were two bachelorettes? Did she think Kaitlyn was so far beneath her that it was inconceivable that the guys might pick her over Britt? Kaitlyn knew there was a very real chance Britt would win the vote. How could Britt not have recognized the very real possibility that Kaitlyn could win the vote?

Well, she’s gone so for the moment, I don’t have to think about her anymore.

Next Chris Harrison approaches Kaitlyn to give her the good news: “Unfortunately, Kaitlyn, I had to send Britt home.” F*ck you, Chris Harrison. The girl was already a ball of nerves. You didn’t have to psyche her out like that.

Kaitlyn is super-excited and wants to go in and greet the guys immediately but oddly, Chris H. insists she stay outside to “process”. It looks like she already has. The only thing I can attribute this to is production wanting to get footage of her talking about her reaction and giving her family the news via phone. Or they could have been setting up something inside. Maybe the rose ceremony room. I don’t know. What I DO know is that the reason Chris H. gave her for asking her to stay outside wasn’t the real one.

But eventually, Kaitlyn is brought into the house and reintroduced to the guys as their Bachelorette. There are a lot of excited faces but the look on Jonathan’s face (the guy who spent the whole night talking Britt up and completely ignoring Kaitlyn) said, “Oh, sh*t”. That’s what happens when you put all your roses in one box, playa’.

So now the guys realize they’re the ones who could possibly be sent packing and start vying for Kaitlyn’s attention.

Joshua sits down with her and gives her the rose he welded for her, the one I suggested in my last post that he should have given her out of the limo. He mentions that he had planned to give her the rose out of the limo but the two bachelorette thing threw him for a loop. So now here’s TWO guys who’ve indicated they were unaware there were going to be two bachelorettes and both thought it was going to be Kaitlyn. Hmmm…

Hey, Chris Harrison. You still sticking with your story that it was the GUYS who couldn’t decide between Britt and Kaitlyn?

Anyway, Kaitlyn is really impressed with the manly steel rose Joshua made for her as well she should be. That was probably the best gift any bachelorette has gotten from one of her suitors, not to belittle J.J.’s puck. I don’t count the ridiculous Neil Lane rings the girls get for their engagements because the guys don’t pay for them.

I swear if someone gave me a ring like that I’d sell it and use the money for a down payment on a house. I couldn’t wear one of those things without feeling like a pretentious whatever the female version of a douche is. And it would be so freaking heavy and annoying. Yeah, I know I’m not going to get a lot of support for that opinion from any of my female readers.

Next, Kupah swoops in to try to make up for lost time. He voted for Britt.

Jonathan has an ITM where he’s freaking out playa’ style because he realizes he was talking up the wrong girl and now he’s gotta go make a connection with Kaitlyn so she doesn’t send his ass home. Not surprisingly, he’s not the least bit broken up that Britt wasn’t chosen. I think Jonathan might not… be here for the right reasons. The counter doesn’t go up because I said it though.

BTW, I forgot to keep track of how many “amazing”‘s and “here for the right reasons”‘s on the show the other night so the counts remain at:

If I get the energy, I’ll go back and watch again.

Tony has an ITM. It must have been after the rose ceremony because someone in makeup finally decided to put some coverup on his shiner. He’s disappointed Britt’s gone. He’s drooping like a sad plant and describes the situation thusly: “Now, there’s only one drinking fountain and we all have to stand in the same line.” Yes, that is kind of insulting to the women but the fact that he’s physically drooping and craving water lends further credence to my theory that he may in fact be a member of the vegetable kingdom.

Jared sits down with Kaitlyn and nervously admits that he voted for Britt but doesn’t want that to take away from the potential there could be with Kaitlyn. So let me get this straight. Jared claims to be single because he knows what he wants but when what he wants walks out the door, he clings to whoever’s left. I smell desperation but Kaitlyn appreciates his honesty. Whatever. This guy will be gone in a few weeks so who cares? To be clear, I don’t say that because I know that for sure. I say it because I know what women are looking for and sad and desperate isn’t it.

Brady expresses extreme disappointment in an ITM. Not sure he’s going to be able to shift from Britt to Kaitlyn.

J.J. says in an ITM that though he felt a stronger connection with Britt, he owes it to himself to get to know Kaitlyn because, “My life, my future, my daughter is woven out of what happens tonight.” Whoa, dude. Ease up. He reminds me of one of those 15-year-old kids on singing competitions that say “this is my last chance”. Hey, J.J., I’m not sure you’re aware of this or not but there are about 3.5 billion other women on the planet besides Kaitlyn. You’re not my type but I’m pretty sure there’s at least one woman out there who’ll go for you besides Kaitlyn after she sends you packing, which she most certainly will.

He sits down with Kaitlyn and starts back-peddling big time. “I was all in for you but then I didn’t get to talk to you…” and so you voted for Britt.

I don’t know what else went down in this conversation but it was obviously more than what was shown because by the end of it Kaitlyn tells him she finds him more attractive than ever, and even says, “I’m INTO you.” She must have had too much to drink by that point. Regardless of this development, I’d bet a million bucks J.J. doesn’t get to final four. Maybe final six but not beyond that.

Next, Chris the dentist gets some alone time with Kaitlyn. He seizes the moment and kisses her now that Britt’s out of the picture. Honestly, Chris seems like he’d rather BE the bachelorette than be WITH the bachelorette but you never know. You can’t always judge a book by its cover. Just because he’s prettier than me, showed up in a cupcake mobile, and is obsessed with oral hygiene doesn’t mean he’s gay. Did I mention his nickname on ABC’s website is now “cupcake”?

Seriously though, I give Chris the benefit of the doubt that he’s on the Bachelorette for the “straight reasons”. He seems like he’s really into Kaitlyn. And according to Kaitlyn, Chris has “got wheels”. Is that what the kids are calling it these days? When a guy’s a good kisser he’s “got wheels”? If I told my boyfriend he had wheels, he’d probably say something like, “Yeah, I know. I drive you everywhere. Are you feeling okay?” I’m so old.

The guys in the house are turning green over the kiss and the word spreads fast.

But alas, despite his “wheels”, Chris does not get the first impression rose.

Who’d I say would get it? I think I said Shawn B. Vindicated!

I don’t think Shawn B. is that attractive but he looks and sounds A LOT like Ryan Gosling who I do find attractive. Sparks fly between Kaitlyn and Shawn B. during their celebratory makeout session. The other guys are going to have to really pick up their game now to overcome the chemistry between these two. I don’t know if Shawn B. will be there at the end but he’s gonna be around a while. I would have thought he might even make it to the final two until I saw the season promo at the end of the show but I’ll talk about that more in a bit. I could be completely wrong but my spidey senses are telling me Shawn B. may make an earlier than expected exit.

So here’s who got roses at the rose ceremony:

Shawn B. already has one so that leaves 18 to hand out.

Between the 9th and 10th rose, Brady, the dopey singer-songwriter from Nashville, interrupts the rose ceremony and asks Kaitlyn to step outside. So I’m thinking he’s probably going to exit because he can’t flip-flop that fast from Britt to Kaitlyn but there’s also a little part of me thinking he might be a total slime ball and try to score some much needed points with Kaitlyn and thus lose all respect in everyone’s eyes.

But he turns out to not be a slime ball at all and I have to admit I underestimated him and not just because he was honest with himself and Kaitlyn and left to go find Britt. It’s because of this quote which I think is one of the best things anyone has ever said: “The risk of love, no matter the consequence, is always, always, worth it.” Well-said, Brady.

So here are the guys who got eliminated: David (quiet guy, voted for Britt), Bradley (“love/love match” guy), Shawn E. (car “pool” guy), and Josh (the stripper – I called that one).  I guess I was also right about Bradley being eliminated at the 1st or 2nd rose ceremony. Brady eliminated himself and Ryan M. got kicked off.

Here are their faces:

On the next page, I’m going to talk about the season preview which I could write a whole other blog about but I’ll try to keep it as short as possible.