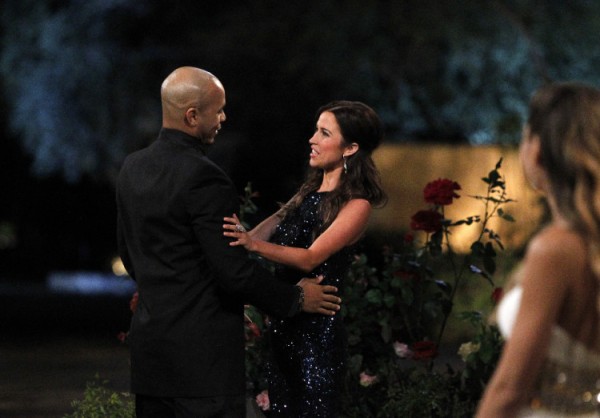 When the episode started, I didn’t think I was going to have much to say about it but as usual, things got “dramatic” on The Bachelorette. Thank you, ABC, for never failing to provide us with a train wreck to gawk at each week on your lead’s path to eternal love.

The episode begins with a brief interview between Chris H. and Kaitlyn. I think I may have to start keeping another word count this season because Kai-Kai has her own go-to word: “excited”. I swear she must have said it about 50 times throughout the episode. Let’s just say that Kaitlyn is very excited to be The Bachelorette.

Next, we see the resolution of what happened when Brady went to Britt’s hotel room. First, Britt sobs on the phone to her mother about how sad she is to be going home but her prospects are about to get a little brighter. Brady knocks on her door and she lets him in. He greets her with a hug and broaches the subject of them getting to know each other and Britt accepts. Of course, she does. She’s just been rejected when along comes a man who already puts her on a pedestal after knowing her one night and offers her a shoulder to cry on. Bring on the dysfunction.

Back at the mansion (which I affectionately refer to as the “tool shed” when it’s filled with The Bachelorette’s suitors), Chris Harrison announces there are going to be 2 group dates and 1 one-on-one date.

The guys arrive at a boxing gym and are greeted by Kaitlyn and none other than Laila Ali, Muhammad Ali’s daughter and undefeated women’s world boxing champion.

An aside: I actually had biology class with Laila during the brief time I attended Alexander Hamilton High School, a public school in West Los Angeles, during my junior year. I probably wouldn’t have remembered her except that we had a minor verbal confrontation in one of our classes. The teacher mentioned the possibility of using Gorilla’s as surrogates for human babies and singled me out and asked me what I thought about it. Now, I think it’s unethical because of how it would affect the female gorilla to have her child taken from her but I was 16 and I didn’t see it as a big deal and said so. Laila took offense and said something to the effect of, “Ew. You nasty.” I thought she was a bitch but she was also scary as f*ck so I kept my distance and my mouth shut.

The young bachelors on the show, however, who come from all over the country and aren’t used to seeing famous people as a matter of daily life, are completely starstruck by Laila and are excited to get to work with her.

The guys learn how to box with her assistance. The most exciting thing that happens in the gym is when Ben H. accidentally breaks a window with his jump rope. Cute and articulate he most certainly is, but athletic he is not.

At some point during the training session, most of the men find time to talk to Kaitlyn, after all, this is a date. Kind of. Not where I would want to take a bunch of guys I’m considering marrying in a few weeks time but, hey, ABC plans this crazy sh*t so I can’t really blame Kaitlyn for it. Kaitlyn mentions to Laila that Kupah is the only man who hasn’t stopped training to talk to her. This will become a factor later on in the show.

The fights are to take place in a ring outside. Not surprisingly, the entire audience is female. I don’t think there are too many men in America combing the internet to find live Bachelor/Bachelorette events to attend.

Ben Z. and Daniel are up first. Height-wise, they are evenly matched but at 6’2″ and 225 pounds of sheer muscle, Ben Z. is an absolute beast. He’s the guy who got the tryout with the NFL. Ben comes out swinging and Daniel’s done in a matter of seconds. In an ITM afterward, Daniel says “Daniel fights like he’s wearing a tutu. What’s inside those boxing gloves? Tea cups?” Don’t be too hard on yourself Danny. Ben Z. could take down the mightiest of warriors.

Next up, Corey and Justin. Corey wins.

Then Ben H. vs. Jared. This fight is a shocker… kind of. Ben H. didn’t exactly display a whole lot of grace when he broke that window with the jump rope earlier but he’s 6’4″ and Jared’s only 6′ but Jared managed to knock Ben H. to the ground with a single punch. It was like watching King Kong getting knocked off the Empire State Building with a feather.

Kaitlyn is concerned she’s going to be spending some of her one-on-one time in the ER.

Next is Tanner vs. Kupah. Chris Harrison bets a “hundy” on Kupah. Note to Chris Harrison: you aren’t cool enough to pull off that word.

It looks like Kupah’s total focus on his training at the expense of building a connection with Kaitlyn has paid off… for now. Kupah wins handily.

The semi-final round is Ben Z. vs. Corey and Jared vs. Kupah.

Taking Corey down is like taking candy from a baby for Ben Z.

I’m shocked again when Jared manages to take Kupah down. I swear Jared looks small on TV but I think it must be because all the other guys are giants.

So it’s the final round. Jared vs. Ben Z. (a.k.a. David vs. Goliath). Jared tells Ben Z. not to pull any punches before the fight. I admire your confidence, J, but that’s like a pencil sharpener decepticon telling Optimus Prime not to take it easy on him.

Surprise of surprises. Jared is knocked out. Not unconscious but definitely injured. Jared says he’s fine but the doctor says no and Jared is forced to leave the date and go to the ER.

The rest of the guys and Kaitlyn get cleaned up and continue the date at a posh hotel without him.

Kaitlyn pulls Ben Z. aside first. It seems only fair since he did win the tournament even if it meant putting a guy in the hospital. Then Ben Z. drops the “C” bomb on her. He tells her the story of his struggle to overcome the death of his mother from cancer. I still know nothing about Ben Z. other than that his mother died of cancer when he was 14 and he had a failed tryout with the NFL. He seems sane which I appreciate but there’s more to compatibility than sanity.

A little while later, Daniel and Kaitlyn are talking about his clothing and furniture line when one of the producers walks in and hands Kaitlyn a note. At first, I was thinking it was Nick Viall. But it turned out to just be from Jared. Yawn.

He decided to stop by the date because it was on “the way back to the mansion.” Sure it was. Not all of us are so unfamiliar with the production process that we don’t realize that it took at least 90 minutes to set up and shoot all the footage with Jared outside the hotel. It was not just a casual stop on Jared’s way home from the hospital and according to him, the doctors told him he needed to rest. 90 minutes on set doesn’t qualify.

But the stop did earn Jared a kiss. This is the first time I’ve seen some hint of manliness in Jared. Not only did he kick ass in the boxing ring but he took charge with Kaitlyn, led her away from the rest of the guys, and laid one on her. I can’t believe I’m saying this, but in that moment, Jared was actually sexy. It was probably just a freak occurrence though. I don’t expect it to happen again.

Back at the mansion, a date card arrives. In an ITM, J.J. says he feels very confident that he’s going to get the one-on-one. Wah-wah. Clint gets it instead. Wait. What?

This is the first one-on-one of the season and the blonde, neanderthal-looking guy with nothing to say gets it? Mind blown.

Back on the group date, Kaitlyn gives Ben Z. the group rose. And he gets a kiss. Ben Z. is now a frontrunner in my mind. I see a place for him in the final 4. I also said last week that the winner is usually one of the men featured on the first episode and since I no longer see Ian being the man standing in the end, maybe it’s Ben Z. I don’t see them together but you just never know. I would never have put Sean and Catherine together but it happened.

Next, Clint and Kaitlyn have their one-on-one. Clint has been such a non-entity for me so far that I forgot he brought Kaitlyn a framed drawing he made of Chris Harrison riding a triceratops to the first rose ceremony. If I look past his face, I have to admit, that’s a pretty creative gift which could have worked for either Bachelorette. And it makes sense that he has some artistic ability being an architectural engineer and all (attention all other bachelors: Get a job!)

Kaitlyn tells him how much she “freaking loves” the picture and that it’s hanging in her house on the way to their date. I don’t know why but they’re driving in an old, red Mercedes to the date. ABC, can we please dispense with your attempts to make this look like a normal date? It’s an insult to our intelligence, especially given the nature of the date that they’re about to endure. Get them a real car and a driver. Thanks.

So apparently it’s “all the rage” now to get your photo taken with your fiance underwater, fully clothed. WTH? Is this really a thing or is ABC getting the service for free so they’re trying to make us think it’s a thing? Whatever the case, this is the romantic date Kaitlyn and Clint “get” to enjoy.

Kaitlyn claims in an ITM that this is her first underwater first kiss. The hell you say.

The photo shoot wraps at dusk and the photographer says she needs to go check the pics which is convenient because Clint and Kaitlyn have decided to forgo taking any more photos in favor of making out in the pool. And then out of it.

J.J. is becoming really hostile and arrogant in his ITMs. He says he wants Tony (chia-man) gone. Not sure why he’s taken a disliking to Tony other than the fact that Tony might be one of the most annoying people on the planet but  J.J. makes it abundantly clear that he wants Tony’s closet space. (BTW, earlier in the episode Tony referred to love as being “as perennial as the green grass.” I can’t wait for him to finally admit he’s an escaped botany experiment gone horribly wrong.)

We next see Kaitlyn and Clint enjoying a rooftop dinner. They have a nice chat. Per Kaitlyn, Clint “brings out her romantic side,” they make out some more, Clint gets the rose. Nothing exciting to report. I guess I have to deal with the fact that Clint is going to be around longer than I thought and I’m going to have to get used to his face.

3 thoughts on “Bachelorette 2015 Recap: This Season’s Villain and the Race Card Gets Played”