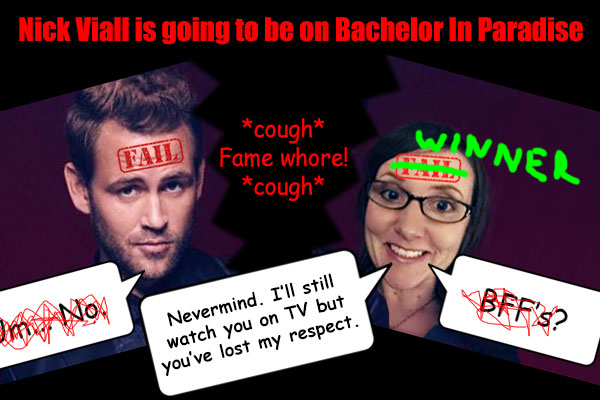 Thanks to everyone who commented on my last post. I really appreciate all of your support.

I made this offer to one of my other commenters last week and I’m extending it to all of you as well: If there’s anybody out there who wants to blog about something but doesn’t want to go to the trouble of setting up their own blog, I’m looking for writers to contribute to mine.

I’ve written a lot about the Bachelor franchise but I haven’t had much time to write about anything else. So contact me and let me know if there’s something you’ve been dying to write about but just haven’t had an outlet. If you look at the menus and sub-menus at the top of the page, you can see some of the topics I had originally intended to write about when I started this blog. If there’s anything there you’re interested in writing about or there’s something not listed you’re interested in writing about, drop me a line. I can change the menus easily to include new topics.

I recently found out that Nick Viall is going to be on BIP this summer. As some of you know, I’ve expressed in the past a special fondness for Nick and you’d probably think I’d be happy to hear that he’s going to be on Bachelor in Paradise this summer but in truth, I have mixed emotions about it.

I’m happy because he always makes for interesting television which will make BIP a little easier for me to sit through (I find BIP almost unwatchable generally – there’s only so much contrived drama I can take) but I’m sad because I am forced to admit that Nick does not appear to be going on these shows for the “right reasons”. Methinks he is a fame whore.

I’ve had my suspicions for a long time and I didn’t want to believe it because he’s intelligent, witty, and seemingly insightful but I don’t know what else to make of his decision to go on BIP after he said last year that he didn’t plan to go on any more shows in the Bachelor franchise.

His Twitter following has been stagnant at 88.9k since the end of last summer and his attempt to further his career in the limelight as a famous blogger failed. I made an effort to reach out to him and offer to teach him how to make his blog successful using his fame as a springboard but, alas, I got crickets in response. And now to keep building his brand, he’s going back to the franchise that made him a brand instead of a person. At some point though, if he doesn’t figure his sh*t out, people will tire of him and he will fade back into obscurity because he didn’t know what to do with his fame to create a meaningful reason for him to stay famous.

Being born and raised in Hollywood and knowing how superficial and cut throat the TV and film industry can be, I find it difficult to respect people who chase after its soulless glitz and glam at the expense of seeking out that which truly gives meaning to life like love, wisdom, peace, and opportunities to make the world a better place.

I don’t begrudge an actor who feels the acting bug to the depths of his or her soul to pursue their craft and end up famous as a result, but I do begrudge the pretenders who equate fame with importance and think that if they are famous, their lives somehow have more value than those of us living in real reality. I only hope Nick sees through my city’s glam sham before he completely loses himself to it.

Not only am I disappointed in him, but I’m disappointed in myself for not seeing his true colors sooner. I hope there is something redeeming about him and I was not completely blinded by my appreciation for his intellect but this move definitely makes me question his character.

BUT at least now the most entertaining thing about BIP won’t be Chad’s empty threats of violence against other contestants. I look forward to Nick’s shenanigans even if, right now, I do not feel he is a kindred spirit.

What do you guys think about Nick being on BIP this summer?

Everyone is still in Argentina. The show’s travel budget seems to shrink every season. I guess it’s because they know we’ll still watch even if they go to exotic locales like Nemacolin, PA. Is it just me or does that sound like an intestinal parasite? 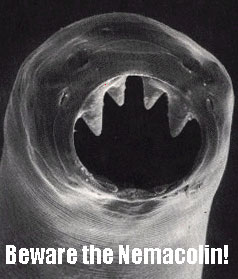 At this week’s rose ceremony, the final four will be decided. Thank God. I’m ready for the season to be over. However, I pray that the guy who becomes our next Bachelor isn’t one of the final four unless it’s Luke. I just don’t think there have been that many guys on the season who could be a good Bachelor. Who knows? Maybe they’ll choose Wells despite the fact that he left so early. A girl can dream.

Alex is the only guy who hasn’t had a one-on-one date and so he finally gets one: “Alex, I gaucho on my mind.” 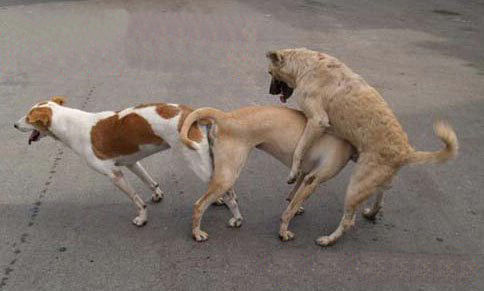 I’m pretty sure this beats any meme I could have found to accompany my comment. I have no idea how whatever is happening in this picture came to pass and I don’t want to know. I’m just happy that it did.

The other boys ride around Buenos Aires on a bus straight out of 1950s London before heading for some meat shack in Ninguna Parte, Argentina where the producers plan to film them giving pointless exposition about what’s happening on the show.

But before they get to meatsa-hut, the other boys rap about Alex to kill time on the bus. The most memorable line was, “you need a stool to get in a sidecar”. Are we all in agreement that there’s no way in hell those guys are clever enough to come up with that rap on their own? I hope the ABC intern got paid his/her due overtime for coming up with that ditty.

At the farm, Alex changes into a gaucho uniform. He looks like a French Boy Scout. 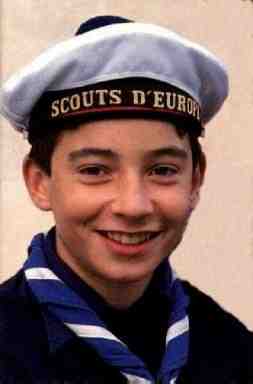 I think the producers just like making Alex look like a fool because he’s only marginally taller than Tyrion Lannister with less than half the personality, intelligence, and depth. They might as well have put him in a jester’s costume and called it a day.

The date starts normal enough riding on horseback but then things get really strange. The professional gaucho makes one of the horses lay down on its on its back. This is some seriously freaky jedi mind trick horse yoga. What’s the equivalent of child’s pose for a horse? Foal pose?

If that wasn’t weird enough, Jojo and Alex lay down and rest their heads on the horse’s side. So… we’ve got two vertically challenged adults making out while cuddling up to a horse… what does this remind me of?

Alex and Jojo spend the whole day making out and seemingly having a great time together and then at dinner, Alex professes his love for Jojo to which she responds, “I don’t feel as excited about that as I should.” 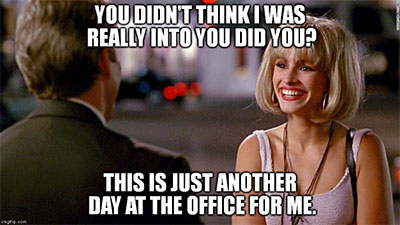 And with that, Alex is gone. Hallelujah. Glory be. Can’t stand him.

Next: Jordan’s One-on-one, The Group Date, Luke’s One-on-One, and the Rose Ceremony