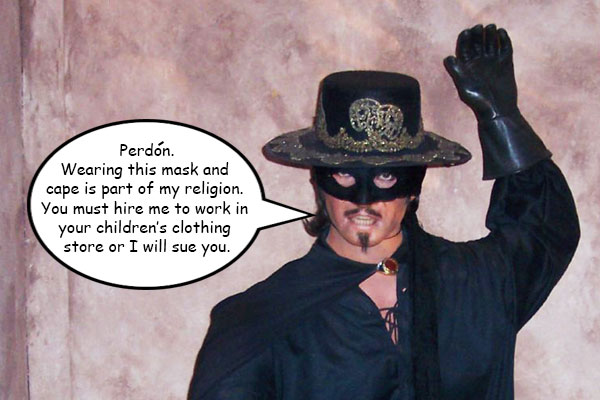 Before everyone gets mad at me for the Zorro pic, I want to be clear that I in no way intend to hate on Muslims in this article and that I consider the rights afforded by the first amendment to the U.S. Constitution to be the cornerstone of any advanced society. Additionally, I altered the photo above under the Creative Commons license. The photographer has no knowledge of my alteration and does not promote any of the ideas set forth below.

I ask that you hear me out before passing judgment.

Elauf vs Ambercrombie & Fitch, from my understanding, is a case in which a 17-year-old Muslim woman, Samantha Elauf, of Tulsa, Oklahoma sued Ambercrombie & Fitch for violating her first amendment right to religious freedom by denying her a job at the teen clothing company because her traditional head scarf (hijab) didn’t match their “look policy”.

According to the New York Times, the dress code to work at Ambercrombie & Fitch embodies a “classic East Coast collegiate style.”

That’s funny. Until now, I thought in order to work at A & F, you had to be under 25, wear a size 0 if you’re a girl (meaning you can get a pair of their jeans past your ankles), and if you’re a guy, have washboard abs which you’ll be forced to bare for the gawking eyes of mall-goers and pedophiles. But I digress…

The case was heard before the Supreme Court of the United States and Elauf won by a vote of 8 to 1, with Justice Clarence Thomas dissenting. And according to the same New York Times article mentioned above, Justice Antonin Scalia said, “This is really easy,” when handing down the decision.

What I want to know is WHY it was so easy. For me, this case brings up a whole host of constitutional and moral questions that I don’t think can be easily answered if one is to adhere to the SPIRIT of the Constitution rather than adhering to an over-simplified, black-and-white version of it.

Ambercrombie claims they didn’t know the scarf was worn for religious reasons but that’s disingenuous since they obviously made the assumption she would be wearing it on a regular basis.  If they thought she was just making a fashion statement on the day of the interview, they would have hired her and just asked her not to wear her head scarf when she came to work.

I find it equally disingenuous, however, for a Muslim woman living in a red state in the aftermath of 9-11 to make the following statement, “I was born in the United States and I thought I was the same as everyone else.”

It’s completely wrong and cruel and my heart goes out to all the Muslims (and those who “look” like Muslims) of this nation over the shameful discrimination they’ve had to endure since the 9-11 attacks. But the reality is a good portion of this country thinks that all people of middle-eastern descent are terrorists.

Elauf also stated that she loved going to the mall so she had to have an inkling of how discriminatory Ambercrombie & Fitch is in its hiring policy when it comes to looks and that the chances of her getting hired there were probably ZERO.

So let’s assume two things for the sake of honesty and rationality: 1) Ambercrombie & Fitch knew Samantha Elauf was a Muslim and didn’t hire her because her religious attire didn’t meet their dress code and 2) Ms. Elauf knew she would very likely not get hired before going in for her interview for the reason stated above. I will not speculate as to why she would apply for a job she wasn’t likely to get but I’m also not going to pretend either of these parties is completely guileless.

To me, this case is not about religious freedom so much as it is about a form of discrimination that we all face on a daily basis: looks-based discrimination.

This is why this case should not have been so cut and dry. Ambercrombie wants to present a certain image to the world and by hiring a woman who doesn’t fit their image, they could potentially do damage to their brand which is bad for business. I don’t agree with the image they think is appropriate to inflict on adolescents but forcing the company to hire women who wear hijabs isn’t going to fix the problem in my opinion and the point of the lawsuit shouldn’t be to knock A & F down a peg for being a-holes, but to determine if they were actually discriminating against a potential employee because of her religion.

I think Ambercrombie’s hiring practices are generally deplorable but there are a lot of jobs in this world you can’t get if you wear a hijab or a cape and mask or you look like this guy:

THAT’S why Samantha Elauf didn’t get hired. Women in hijabs don’t sell expensive teen clothing (yet). And if Ambercrombie really didn’t want to hire her because she was a Muslim, it seems very unlikely they would have said a damn thing about her hijab unless the hiring manager was completely unaware of the first amendment (I can’t completely rule out that possibility given the ever increasing ignorance our population is sinking into). They would have just said, “Thank you. We’ll go over your application and get back to you.” And never called her. That’s how illegal job discrimination is usually carried out.

We are NEVER going to live in society where looks are not going to factor in to our hireability. Even when applying for jobs that don’t require us to look one way or another, we are judged on our looks. That’s why we don’t show up to interviews in ratty old sweats.

So then where do we draw the line between looks-based discrimination and religious discrimination? I don’t really have a good answer for that. I personally think that most jobs in this country should allow Muslim women to wear hijabs, Jewish men to wear yarmulkes, and Christians to wear crucifixes but should they be allowed to wear them at ALL jobs? In my opinion, no and I think most Americans would agree with me. Looks-based industries simply can’t allow for that level of religious expression under our current cultural norms.

But if we accept the double standards set by these industries, we must face the fact that we cannot, and likely never will, fulfill the full promise of religious freedom to the citizens of our nation. We must admit to ourselves that as much as many of us fight for equality for all, maybe it’s not really what we want because this is what full equality looks like:

For the record, I think that Ambercrombie & Fitch was wrong to not hire Ms. Elauf because of her hijab. But I also disagree with the Supreme Court’s decision. If one kind of business can interfere with the religious practices of individuals by disallowing their religious attire, then all businesses should be allowed to do the same. I also think the decision sets a precedent that may open the floodgates to employers being forced to accept all manner of “religious” attire and bodily adornments that may not fit their business’s image.

Could be good, could be bad. Times will change and time will tell.