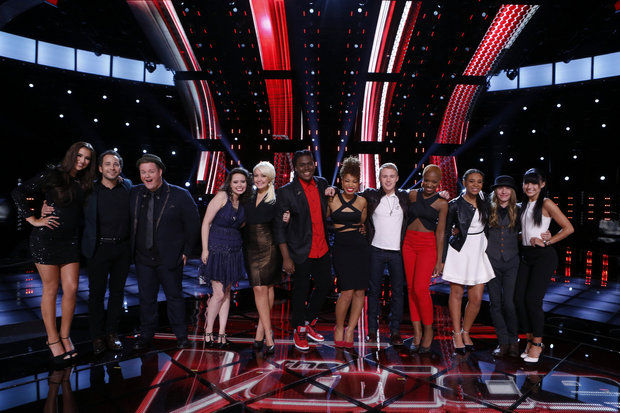 Here’s a recap of the performances by the top 12 finalists on the first season of The Voice in 2015. Reba McEntire was the evening’s guest host.

First up, was Hannah Kirby of Team Blake. I LOVE Hannah Kirby. She’s definitely one of my favorites. She’s got great personality on stage and if the song “Witchy Woman” was based on an actual person, I could see it being her. I’m glad Blake saved her over Sarah Potenza (the Janice Joplin sound-alike).

I love them both but I see a future for Hannah Kirby that I don’t see for Sarah. The sad reality is that though some of the singers on these shows are older and great, the fan base will very likely not be there for a performer who’s past their prime. I loved Sarah but I like Hannah better despite Sarah’s obvious experience and total command of the stage.

Hannah has a ways to go to get to Sarah’s level of comfort on stage but I love that she comes out every time with fire in her eyes and a cool darkness dripping off her with every step, note, and expression. She’s a definite wild-child. Strangely, Reba compared her to Dolly Parton. What? I don’t get it. She doesn’t sound like Dolly and certainly doesn’t look like her.

Her song was “The Edge of 17” by Stevie Nicks. She didn’t kill like she has in some of her previous performances. It was a little rough around the edges. She seemed a bit out of breath from interacting with the audience but a solid performance overall.

Second up to bat was Brian Johnson of Team Adam. I’m not completely sold on this guy. He’s a cutie. He looks like a big Nordic teddy bear to me. But is his voice more than vanilla? Adam seems to have a lot of faith in him and ironically enough, his song tonight was “If I Ever Lose My Faith in You” by Sting.

For me, it was Brian’s best performance so far but I don’t hear anything special in his voice. Then again, I didn’t think much of Chris Jameson last season and he completely blew me away in the end so you just never know.

India Carney should be a shoe-in to win this competition. She’s absolutely beautiful and she’s a classically trained singer whose got some serious chops.

However, I have a couple of issues with her vocal performances thus far. One, her vibrato is perfect for opera but sounds terrible on modern songs. We’ll have to see if she can reign it in. Two, she lacks confidence in her performances. She tries to command the stage but I can feel her self-doubt which likely stems from her own insecurities about singing pop songs.

India chose “Take Me to Church” by Hozier (currently my favorite song). Her performance was surprisingly good and she finally managed to get a handle on her vibrato for most of the song. The only time she faltered was when she was interacting with the audience. It wasn’t her best performance but I’m happy to see she has the ability to control her vibrato. I think she missed the point of the lyrics but I think most people do. The song is a critique of the Catholic church and an embrace of hedonism. The line, “Take me to church,” is supposed to be sardonic.

Mia’s voice is one of the most unique in the competition and the girl’s got range. She seems a little bit reserved which comes across as either shy or mysterious on stage. I think she needs to get comfortable performing but her voice is amazing.

Mia has the unique ability to hit astronomically high notes that Pharrell refers to as her “dolphin tone”. I love the dolphin tone on the really high notes. On the way there though, her falsetto seems a little weak. Nothing that can’t be fixed with a little auto-tune though.

Mia sang “Miss You” by The Rolling Stones. The performance was solid but not memorable. Still love her though.

Deanna’s voice is by far the most unique in the competition. It’s not affected at all which I like and it’s a woman’s voice. She’s also stunning which definitely won’t hurt her career. She’s struggled a lot with pitch and confidence issues but overcame them last week and finally delivered the performance we’ve been waiting for.

This week’s performance wasn’t as solid as last week’s but it was still good. Deanna sang “Oceans” by the Christian band, Hillsong United. Deanna was a bit hesitant to sing a Christian song at first but Adam talked her into it. News flash, Deanna: no one cares what you’re singing about as long as the music is great, you sing great, and you sell what you’re singing. I’m not into Christian music but Deanna’s voice is awesome so I don’t care what she sings.

She struggled a bit in the performance. She was shaky in the beginning and she needs to learn to stay in character! Don’t get goofy when the audience cheers you, D. They’re gonna keep doing it and it takes us right out of the experience when you smile like a giddy teenager. It’s hard to believe she is actually a teenager but she is so I have to cut her some slack in this regard. Still, I want her album.

It’s obvious that Sawyer is a heavy favorite to win this competition… for now. Others are starting to break away from the pack though so he better find something more up his sleeve than soft folk music soon. Don’t get me wrong. I love his tone but there are some serious powerhouses who could leave him in the dust. And where did he get that hair? I want it.

It was a solid performance of “Imagine” by John Lennon but not Sawyer’s best. I hoped for more on this song because it’s such a great song but it was just good. Not great.

I haven’t been that sure about Rob. He has a great, soulful voice and his falsetto is crazy good but he seemed to lack confidence… until tonight! Holy Batman, Batman! Where did that performance come from?

Rob sang “You Put a Spell on Me” and I think he just might have. He sounded so cool and smooth and powerful. He really knocked it out of the park tonight. His standing ovation from the judges was well-deserved. Definitely, the best performance of the night… up until that point.

Corey’s really not my style but he’s got CBF (Cute Boy Factor) and he sings country so all the little girls in the middle of the country are going to vote for him. He’s a good singer but compared to Craig Wayne Boyd who won The Voice last December, he’s just average. He’ll probably get better with age and experience.

CWB was just all kinds of sexy and he was humble too. There’s just no way this kid could measure up. But White could be the Justin Bieber of country music if he plays his cards right. That’s not a putdown. Whatever people may think of the Biebs, he’s successful and filthy rich.

White’s performance of “Why” by Jason Aldean was respectable but too vanilla for my tastes.

Pharrell definitely had his pick of the litter this season. Most of the great singers still on the show were on his team at some point. Koryn was an unlikely choice to be one of the final members of Pharell’s team but Pharrell often acts from the heart and doesn’t worry too much about letting better singers go in favor of people he believes in.

Maybe he realizes that most of these people are really not going to make it big after this show given its track record so he might as well work with people he likes over people with more talent.

But I think Pharell got it right this time. Koryn is turning out to be a force to be reckoned with. She could very well be the next Jennifer Hudson. She too got a well-deserved standing ovation from the judges for her rendition of “Stronger” by Kelly Clarkson.

Let’s be honest. Team Adam is the weakest team this season. Adam just couldn’t catch a break in the blinds and two of his remaining members were rejects from other judges’ teams. Joshua Davis is probably the most seasoned and consistent performer on Team Adam though he has yet to really wow me.

I would probably buy his album if he did something alternative but if he’s just going to play folk music, I’ll probably pass. I wonder if there’s a market for him or if this is really his only moment of fame. Time will tell.

His performance of “America” by Simon and Garfunkel was my favorite of his so far in the competition and he did it without his guitar so he’s progressing as an artist. It was a very solid performance as usual.

Is Meghan ever not great? I’ve heard that some people think it’s unfair that she’s on this show because she’s already had a professional career in music but so what? A lot of these people are professionals who just never got a solid recording deal.

That’s what makes The Voice better than American Idol (I watch both). I want to watch and hear professional, gifted performers trying to make their dreams come true. These people all deserve to have a national spotlight shone on their talent and the fact that most of them don’t become superstars afterward is just sad.

The truth is Meghan is likely not going to get another record deal out of this show like most former Voice contestants so can we please just enjoy her beautiful voice while we’re privileged enough to hear it?

Meghan sang “Girl Crush” by Little Big Town which both Blake and Reba claimed is big on the country charts right now. Is country music moving into the 21st century by embracing a song about a lesbian fantasy? Color me impressed.

Linsey was fantastic as usual. And sexy.

Kimberly is absolutely phenomenal. Why isn’t this woman an international superstar? She’s got everything going for her. She’s a rocker with church soul, she’s got class, she’s got style, she’s got a world-class voice, and she is absolutely formidable on stage. This woman is not just a powerhouse, she’s POWERFUL. Christina just might win this year. Fingers crossed.

Kimberly gave a mind-blowing performance of “House of the Rising Sun” by The Animals that gave me what Jennifer Lopez affectionately refers to as “goosies” – goosebumps. She brought the house down and lifted the judges out of their seats.

Noteworthy Performances of the Night:

1. Kimberly Nichole – House of the Rising Sun
2. Rob Taylor – I Put a Spell on You
3. Koryn Hawthorne – Stronger

Whose albums would I buy?