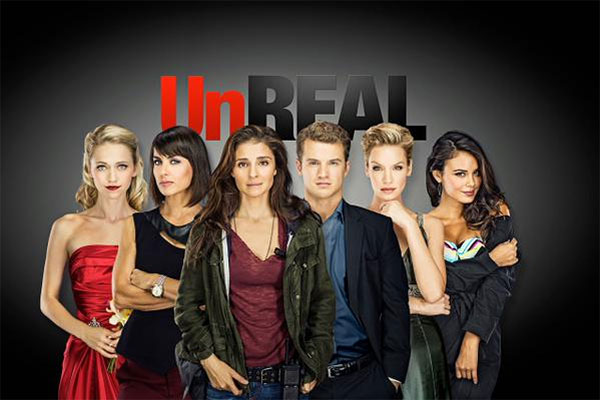 UnREAL: Behind the Scenes of The Bachelor Through the Eyes of a Former Producer

Have you seen Lifetime’s new hit series, UnREAL? Well, if you’re a Bachelor/ette/IP fan, you should definitely check it out.

A lot of us talk about The Bachelor franchise being our “guilty pleasure” but after watching UnREAL, I am starting to wonder just how guilty we are by promoting the franchise through our viewership.

I always knew the show was produced. I know what it takes to set up a shot and lighting and make sure you don’t get any other crew members or equipment in the shot and that process simply doesn’t lend itself to the spontaneity the producers of The Bachelor and its various spinoffs would like us to believe is actually possible on reality TV.

And we’ve all heard the rumors about reality TV being scripted and if you’ve read anything Reality Steve has to say about what goes on behind the scenes, you know a lot of what goes on on The Bachelor series is staged and the producers manipulate the contestants into creating the dramatic footage that they use to further their story lines.

But I was truly shocked by UnREAL. Producers competing with each other for cash to get the best reactions out of cast members? Using the tragedies in contestants’ lives to manipulate them into crying on camera? Deliberately casting naive and/or psychologically unstable men and women so they can be easily manipulated into doing the producers’ dirty work?

And what about the contestants? How many actually go on the shows to find love and how many are there to promote themselves to further their careers? How many are just flat out fame whores?

UnREAL is a fictional account of what goes on behind the scenes of a show called “Everlasting,” an extremely thinly-veiled reference to The Bachelor. The show stars Shiri Appleby, the star of the hit show “Roswell” that aired for several seasons in the 90s, who gives a powerhouse performance as a morally ambiguous producer who’s turned to the dark side by turning in her feminist card in favor of using her feminine wiles to manipulate other women into playing into our society’s worst female stereotypes on national television.

The creator of the show and former Bachelor producer, Sarah Gertrude Shapiro, claims the show is pure fiction but doesn’t deny that it’s based on her real life experiences working on The Bachelor and several other reality shows. Does the show exaggerate for dramatic purposes? The answer is undoubtedly yes. But is it the best inside look into the making of The Bachelor and other reality shows Joe (or Jane) Public is ever going to get without actually working behind the scenes of one? Again, a resounding yes.

So if you love The Bachelor franchise and you want to know what goes on behind the scenes, watch this show. But be prepared to be disillusioned in a big way. The fantasy of forever love The Bachelor tries to sell us every season is just that: Fantasy.

But you don’t have to be a fan of the franchise to like UnREAL. It’s fantastically written, the characters are compelling, and the performances are Emmy-worthy. The show is a standalone without The Bachelor franchise but it makes it all the more interesting if you’re a Bachelor fan.

However, be warned. UnREAL is dark, intense, and edgy. This isn’t your grandmother’s Lifetime lineup. If you can handle it, I strongly recommend you watch the show which will debut its second season sometime in 2016.

If you missed the first season which ended in early August 2015, there are a couple of ways you can still watch it. If you have subscription cable, you can visit Lifetime’s network and login using your account details given to you by your cable provider or you can watch it on Amazon Instant Video starting at $1.99 per episode.

I tried to watch it on Lifetime but their streaming technology isn’t up to snuff and I couldn’t get through an episode without the picture jumping all over the place. Not to mention the ads. So I watched it on Amazon Instant Video. You can buy the whole season (10 episodes) for $18.99 in standard definition. It was completely worth it.

And for the record, I’m not getting any kind of kickback for posting that Amazon link. I just liked UnREAL so much that I wanted to share with you dear readers where you can watch this amazing show.

If you do watch it, let me know what you think. Are we promoting the destruction of the vulnerable men and women who are cast on these shows by continuing to watch them? Comment or shoot me an email.

My readers are really important to me and the best way to find me again is to subscribe to my blog.