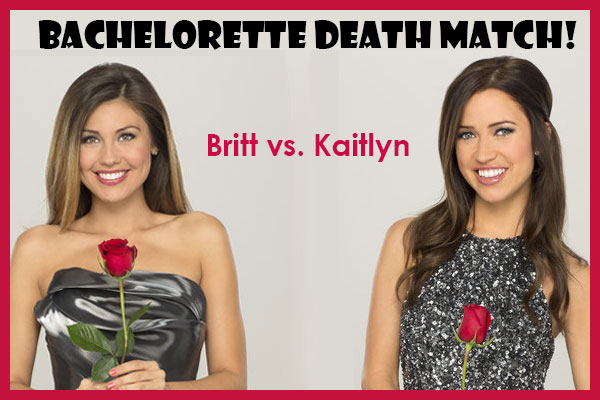 It’s one of my favorite times of the year! The start of the new Bachelorette season!

The Bachelor franchise has been one of my guilty pleasures for a long time. I mostly shake my head, roll my eyes, and generally hate on most of the contestants but it keeps me entertained 16-20 Monday nights out of the year.

This season was the big shake up: for the first time in the franchise’s history there are TWO bachelorettes and the 25 men selected to be on the show will have to decide who THEY want to be the bachelorette. A majority vote wins.

So why did they do it this way? I think the answer is pretty simple though I haven’t heard anyone willing to speak the ugly truth. Kaitlyn is cute, sincere, funny, and sane but has a really hard time opening up while Britt is outgoing and drop-dead, one-in-a-million gorgeous but she’s cray.

If the producers of the show could merge both of these women into one, they would but they can’t. So they’re leaving it up to the men to decide… kind of. Basically, they let America decide by putting it out there back in March that both women were up for the role and let the public battle it out on social media to find out who America would get behind. The clear winner was Kaitlyn despite Britt’s phenomenal looks because when it comes to who we (and by we I mean the women of America) want to see as a potential wife for someone, cute and sane beats stunning and crazy any day of the week.

I’m sure some would argue with me about the bad edit Britt got and blah blah blah but I know crazy when I see it having grown up in a fairly insane family. I doubt she ever stands in corners mumbling to herself but her self-obsession, self-delusion, and profound sense of insecurity is plain as day to the trained eye.

Don’t get me wrong. I don’t hate Britt but she would make an absolutely terrible wife and even though I have no illusions about the behind-the-scenes evils of this show, I want to spend my Mondays rooting for someone to find true love and I just can’t root for Britt because I know she won’t find it. She’s just not ready for a lifelong relationship. The most she could hope to find is a quick-burning, codependent relationship that ends in tyranny and tears.

Maybe Kaitlyn won’t find true love either but I give her better odds than Britt so I’m team Kaitlyn and I’d be very surprised if she doesn’t win the vote. Yeah, if you don’t already know, they didn’t show the vote tally last night. I actually cursed at the TV when they cut to black without announcing the winner at the end of the show.

Before I get into my recap, here are pics of all the guys on the show with their names. I can never remember who’s who so this is as much for me as it is for you. All images ©2015 ABC

There are a couple of exceptions (Ben H. is definitely attractive) but mostly it’s hard for me to look at these guys because I’m a face girl.

Okay, on to the recap:

Chris H: “This is one of the most controversial seasons-” blah… whatever, Chris. He then goes on to lie about why they decided to have two bachelorettes. He said it was because the guys they cast were torn but the guys were already cast before it was even known there would be two bachelorettes. Not to mention Chris mentioned at the ATFR last season that it was PRODUCTION that couldn’t decide.

Then the show introduces us to Britt and Kaitlyn. Not about what they do or who they are but how they acted and related to Chris Soules on The Bachelor. Anyone tuning in for the first time would know nothing about either of these women. You can read more about them on ABC’s website: Kaitlyn Bristowe, Britt Nilsson

Ha! Kaitlyn says she hopes that “Britt girl doesn’t show up”. Kaitlyn’s nervous and she has reason to be. She’s up against arguably one of the most beautiful women in the world and these men have to make a quick decision. Beautiful, bubbly, touchy-feely Britt is formidable when it comes to making first impressions (no surprise she got the first impression rose on Chris Soules’ season).

Britt’s excited. Well, of course she is. She thinks she’s got this thing in the bag. She knows Kaitlyn can’t compete with her looks-wise (really, who can?) so she’s confident. And I don’t think I’m going out on a limb to surmise that Britt is used to getting what she wants.

So now we get a preview of a few of the guys:

Jonathan, 33, from Detroit. Works in the automotive industry. Is he a factory worker or a car designer or what? Obviously, whatever he does has allowed him to take off 6 weeks to be on the show.

Best thing that ever happened to him is his son, Skye. No mention of the baby mama. The show makes it look like he has custody but the kid could just be a prop.

Joe, 28, from Kentucky. Insurance Agent. Did they mention why he’s wandering through a barn full of horses in his intro? I can’t recall. Joe’s kind of boring but he seems like a nice guy. Team Kaitlyn.

Josh, 27, from Chicago. Paid his way through law school by stripping but isn’t quite a lawyer yet. We get to see him put on a show for a group of ladies. The dude is covered in tattoos. Not my thing but to each his own. Pretty sure he would prefer himself to either of the bachelorettes. Team Josh.

Brady, 33, from Nashville. A singer-songwriter (i.e. unemployed) who mumbles a lot. He seems like he’s perpetually stoned. Team Brit.

Joshua, 28, from Kuna, ID. He welds. It’s not a flashy job but I guess someone’s gotta do it. He welds a rose for Kaitlyn. Why didn’t he give it to her out of the limo? It would have made a cool gift. Team Kaitlyn.

He’s an “executive recruiter” a.k.a. a head hunter. His job is to find people qualified to run big agencies/businesses for big salaries and he gets a commission off anyone he refers who gets hired.

He was run over by a car. The doctors told him he would never run again. He proved them wrong. He learned a lot about life from the experience. Where have I heard this story before? Not to dismiss Ian’s experience but sob stories on reality TV bore me.

Tony, 35, from St. Louis. “Healer”. He spends his days meditating and making out with plants. I wouldn’t be surprised if this guy ends up marrying one of his Bonsai trees. His speech is incoherent which may be the reason he prefers the company of foliage. I’m not sure he knows he’s on planet Earth let alone that there are two bachelorettes.

Ben Z. 26, from San Jose, CA. He says he’s a fitness coach. ABC’s website says he’s an entrepreneur. So we can assume he’s unemployed. His mom died of cancer when he was 14 and now he spends his days trying to make her proud. Another generic, reality show sob story. Yawn.

I don’t mean to be cruel but these guys are more than the bad things that happened to them in their lives. We’ve all endured adversity. I want to know what they bring to the table as a potential husband, and by that I don’t mean their baggage.

He played football in school and got a tryout with the NFL. Guess that didn’t pan out.

So I really don’t know much about this guy from his preview but at least he’s articulate and seems sane. I think he’ll go pretty far on the show but he won’t be the guy at the altar in the end. Don’t know what team he’s on.

Wow. These are the guys they chose to feature? Slim pickings if this is a representative sample. So far the only real standout is Ian. And usually, they feature the person left standing at the end. Maybe it’s Ian and Kaitlyn? I don’t read the spoilers but I’m sure Reality Steve has already spoiled the ending.

I’m a huge Reality Steve fan and he’s been one of my inspirations for starting this blog but I don’t read his blogs until after the finale because I don’t want to know what happens. He’s right about 99.9% of the time.

Next up: The Limos

3 thoughts on “The Season Premiere of The Bachelorette 2015- Who Will Be Our Bachelorette?”