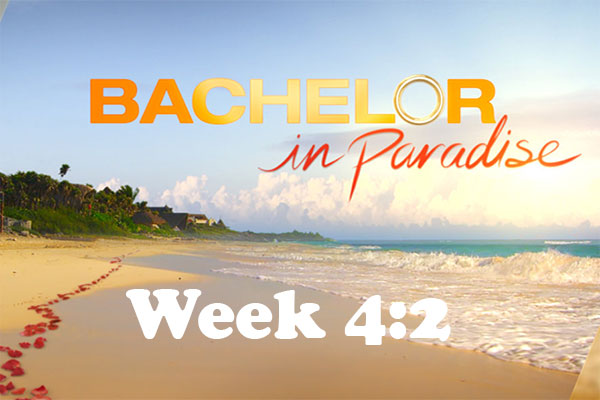 If you want to read my recap for Week 4 – Episode 1 first, you can read it here.

I’m really looking forward to finding out who the next Bachelor is. I predicted in week 2 or 3 of The Bachelorette that Ben H. would be the next Bachelor. Tonight I find out if vindication is mine.

Before I start, I want to talk about Nick Peterson. I said last night that I didn’t remember who he was but I was reading another blog and it triggered my memory. I knew his face seemed familiar but nothing else about him I could place. So Nick was the guy who made it to the finals of the last season of Bachelor Pad and screwed over his partner in the end by choosing to keep the prize money instead of share it. It was either $200k or $500k. Can’t remember.

I remember everyone being up in arms about how what he did was a really dick move and left Rachel Trueheart (his partner) in the lurch but they weren’t a romantic couple. They were playing a competitive game to win money and so he took the money for himself. Both of them had to screw over a lot of people to get to the end so was it really a huge surprise that one of them would screw the other one over in the end? I actually thought it was a ballsy move on Nick’s part especially considering that the other players in the house essentially dismissed him as a love interest or a threat.

One more thing before I get into my recap. If you want to know what really goes on behind the scenes of The Bachelor franchise, I urge you to check out Lifetime’s “UnREAL”. You will be shocked. You can check out my review of it and find out how you can watch the first season here.

Okay, let’s see what Bachelor In Paradise has in store for us tonight:

What the heck are Tenley and Carly doing? It looks like synchronized swimming but on a futon. They probably shouldn’t have worn short shorts to do it though. Black boxes covering their nether regions every time they open their legs to form a V. Oh, the dirty jokes that just flew into my head after writing that sentence. But if you’re going to spread your legs for the camera, Bachelor In Paradise is the show to do it on.

Carly gives us an account of the players who are coupled up. I guess Nick and Ashley S. have made it official despite their inability to have a decent conversation with each other. And Dan and Amber are still together. I’m really hoping that for once in the life of this racist franchise that a black contestant finds love. Go Amber. It’s your birthday! And let it be better than Joe’s.

I missed it last night when Joe said he was going to threaten to show everyone his phone with the proof of Samantha’s text messages telling him to do whatever it took to stay in Paradise. Bring it, Joe. We all want to see that sh*t.

Joe and Ashley I. are the odd men out so they commiserate over their mutual BIP loser status. Ashley I. starts crying about Jared. Joe tells Ashley, “Sorry, I’m not an emotional guy,” which is his polite way of saying, “I couldn’t care less about your feelings because you’re a whiny brat and I’m an insensitive prick so go find someone who gives a sh*t to be your shoulder to cry on.” But at least he WAS polite about it.

Ashley is completely torn up over Jared. She claims Jared “has ruined her forever” because she’s going to compare every future man she meets to Jared. Seriously, you’ve known the guy for what? 5 days? And in that time you’ve determined that a guy who wasn’t ever really that into you and pity kissed you is the only one for you and no other man will ever measure up?

Mikey gets a date card for an overnight date. He asks Juelia. Of course. I really hope Mikey can be the guy for her but I can’t forget how deluded of he was about Clare. That speaks to his emotional maturity and it just doesn’t match up to Juelia’s. She deserves someone who can be a stable, mature partner and a dad to her daughter.

Carly mentions something about Juelia being a single mom and that will affect what she chooses to do on the overnight portion of her date.

Why do single moms always have to keep their legs shut in order to set a good example for their children on a show said children will probably never see? And are single moms supposed to hide the fact that they have sex? Isn’t that how they ended up with kids in the first place? Pretty sure no one would have much of an issue with a single dad slutting it up. Just sayin’.

They fly to Guadalajara in a small jet. Juelia immediately hops on Mikey’s lap and starts making out with him. That’s what I’m talking about! You go widowed single mom.

Oy. More Joe and Samantha drama back at the Paradise hut. What is it this time?

Joe’s says he got the shaft on the Juelia situation. He seems to be finally making friends and influencing people. He’s good with the boys again whom he’s doing a masterful job of convincing that Samantha is the real puppet master.

LOL. Joe is willing to let bygones be bygones if Samantha’s willing to be his girl but “she can crash and burn” if she’s going to continue to deny her involvement in the Juelia situation. So he’ll marry her if she’s willing to be a dutiful wife but destroy her if he chooses not to be with him? Oh, the scruples on this guy.

Joe confronts Samantha about how she manipulated him into doing whatever it took to get a rose. Sam plays dumb. She claims she didn’t know what she was gonna do when she got to Paradise and that she still has feelings for Joe. This girl is a piece of work.

Kirk refers to this as “textgate”. So which one of them is Nixon in this scenario? Where’s David Frost when you need him? He’d get to the bottom of this. (David Frost was the reporter who finally got Richard Nixon to cop to Watergate which led him to resign the presidency.)

Tanner: “Joe fell on the sword for Samantha and she took it out and stabbed him 18 times with it.” LOL.

Kirk sets up a special mini date for him and Carly. He takes her fishing. How romantic :I

Kirk: “If I take you fishing, you know I like you.” I hope Kirk never likes me.

Back on Juelia and Mikey’s date (about time)

They watch wrestling at Lucha Libre? What? Okay, I’m reconsidering my stance on the fishing date.

Mikey and Juelia are given two keys to two individual hotel rooms and they can choose to stay together or apart.

Juelia asks Mikey if he would be uncomfortable sharing a room.

Mikey: “No, because I’m a man.” Bwahaha! Way to give it to her straight.

Juelia and Mikey decide to stay in one room. Awww… they’re going to do it. How sweet.

Back at the Hut

Poor, Jorge. He’s stuck talking to Ashley I. about Jared. I think Jorge deserves a raise.  A BIG one.

Mikey and Juelia get back from their overnight and say they “kept it classy”. So either they did it missionary style or not at all. Lame.

Joe still thinks Samantha is wife material and if he had only handled it differently, she’d still be with him. Wow. She really did a number on him. I’m starting to feel sorry for Joe.

Joe says he wants to sit down and talk with someone who understands that he is a gentleman: Ashley I.? Didn’t he abandon her when she was crying over Jared? Yeah, that just screams “gentleman” to me.

But Ashley is willing to sit down with Joe nonetheless.

Joe: “Let me put a towel down so you don’t get sand in your hoo-hoo.” I remember thinking what a smooth-talker Joe was on The Bachelorette. Now, not so much.

Joe thinks there’s still hope for him and Samantha. Ashley advises him to reintroduce himself to Sam with the line, “I’m Joe and I think you’re the prettiest girl on this beach.” Joe thinks it might work so  he decides to try it.

What Joe actually says when he sits down next to Sam at the bonfire on the beach: “Hi, I’m Joe. Would you like a s’more?” SMH. Samantha says “no thank you” and then straight up ignores him when he tries to continue talking to her in front of the group.

So, Samantha, when you’re alone with Joe you lead him on by telling him you still have feelings for him but when there are people around, he’s a pariah?

Samantha’s the kind of girl that makes guys think all women are crazy. Thanks, bee-otch.

Now Joe’s beating himself up for going for a girl who’s way out of his league. Sigh… how ironic that Samantha tweeted she was “under the Joe spell” last week. Seems more like it’s the other way around.

Justin and Samantha hit it off.

Justin: “You’re a great conversator.” I just threw up in my mouth. The word is “conversationalist”. I’m seriously starting to question the quality of education people under 30 have had in this country. “Conversate” is a verb, New Mexico is part of Mexico? For the love of God, read a book, people.

Joe thinks Justin is going to cock-block himself by singing Joe’s praises to Samantha. LOL.

Meanwhile, Justin is asking Sam out on a date.

Ashley I.: “If Samantha accepts this date, Joe’s going to go straight Kentucky crazy.” One can only hope.

Joe and Sam have another conversation about whether she likes him  or not. She just keeps Joe dangling.

Tanner: “Samantha’s playing chess only the pieces are dudes and the end game is total destruction.”

Next week it looks like we’re going to see the actual text messages Sam sent Joe. Juicy. Can’t wait for that. And Justin goes for Amber? What happened to him and Samantha? I hope Justin dumps her ass the way Sam dumped Joe and Joe dumped Juelia. Ain’t karma grand?

Next: After Paradise – The next Bachelor will be announced! Woo hoo!