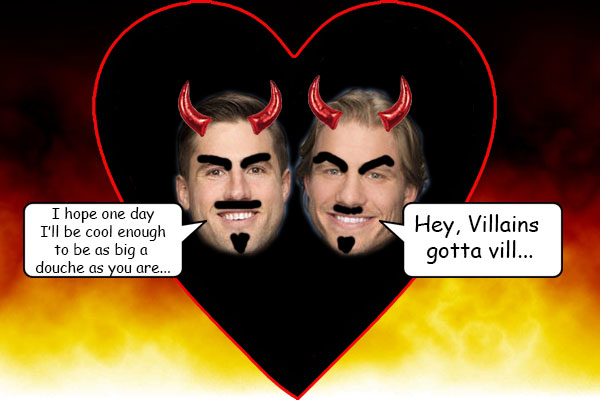 Before I get to my Bachelorette 2015 recap for episode 4, here are some other links I think you’ll enjoy:

Also, before I start my recap, I want to express my total lack of surprise at hearing the news this week that Chris Soules and Whitney Bischoff have called off their engagement. It was completely obvious there was no real chemistry between the two at the final rose ceremony that aired in March. Not sure what the official story is that they’re putting out but I called it.

It’s too bad too because I really like Chris Soules, what I know of him at least. It could be that the Bachelor world opened him up to a whole new crop of women (no pun intended) and eager-to-move-anywhere-to-land-a-man-and-start-her-own-baby-factory Whitney no longer looked so good by comparison.

I don’t think it was coincidence that they waited until after DWTS ended and Chris was free of his obligation to ABC.

So let’s get to the recap. This episode was far more entertaining than last week’s:

Last week, ABC left us hanging on the edge of our seats with the possibility of an angry black man running rampant in The Bachelorette mansion. The very idea was absolutely terrifying. Not.

As I suspected, absolutely nothing came of Kupah James’ angry rant at producers after Kaitlyn unexpectedly asked him to leave because of an argument they’d had earlier where he essentially accused Kaitlyn and the show of using him to “fill a minority quota.”

That’s exactly what they were using him for and I commended him last week for having the balls to call them on it but also wondered how he could not have known that’s why he was there if he’d seen the show before.

So this week, we see the end of the confrontation between Kupah and the producers after Kaitlyn walks out during an ITM to try to get Kupah to calm down. Unsurprisingly, the minute Kaitlyn shows up, Kupah stops yelling. He says he doesn’t want to go. She says he has to. It’s done, he leaves… but not without a few drunken disparaging remarks about Kaitlyn before he leaves. I watched it back a couple of times but it was still hard to completely make out what he was slurring about her before the van arrived to take him away.

This is what I got: “This is what that was…”, Kupah makes a spitting motion, “…you’re chlamydia.” And, “I’ve been dissed by uglier girls than her.”

The dude was wasted if he thought he was putting Kaitlyn down to make himself look better in the face of rejection. Shouldn’t it have been something like, “She’s not even all that. I’ve been dissed by prettier girls than her”? Either way, Kupah’s been dissed by a lot of girls. With all that class he’s got going on? I’m floored. He was much more impressive as a potential race rioter.

Clint, J.J., and Ben Z. already have roses. Here’s who got the rest:

I’m kind of disappointed they sent Daniel home before Tony. I’m pretty sure that was a production decision since Tony is better entertainment value. There’s no way at this point Kaitlyn doesn’t know Tony is cuckoo for Cocoa Puffs.

During the rose ceremony, Tony has a long ITM that cuts in and out where he emphasizes the importance of coming on this show and reaffirms how seriously he’s taking this process because he was even willing to leave his Bonsai trees behind to find love. He also ups the “amazing” count by one. The counts thus far:

He wraps up his ITM with this gem, “I see the world through the eyes of a child, I have the heart of a warrior, and a Gypsy soul.” It’s more like he sees the world through the eyes of a potato, has the heart of an artichoke, and tastes good when added to Gypsy soup. Yes, I am sticking to my plant gag to the bitter end… or at least until Tony leaves the show.

The morning after the rose ceremony, two sumo wrestlers creep into the men’s sleeping quarters and wake them up by screaming and banging on a gong. I would feel sorry for the guys but this is completely staged since they would have already been awake from the camera and lighting crew setting up in their room an hour earlier.

We are informed that these are World Champion sumo wrestlers and one of them is the heaviest Japanese person ever to walk the planet, weighing in at a whopping 600 pounds. There’s nothing like heaving man boob in the morning.

The men on the date are:

The guys are told they have to put on traditional sumo outfits, basically giant thong diapers.

J.J., world-class wit, asks, “Do you guys have an extra large by chance?” Oh, J.J. The diaper is to cover your puny dick, not your unjustifiably inflated head.

A sumo wrestling ring is set up in the front of the mansion. The two sumo wrestlers give a demonstration and then it’s time for the men on the date to go up against the wrestlers. I should mention that in most of this scene, the majority of the shots are 50% pixelated because man-junk is flying and flopping everywhere which amuses Kaitlyn no end.

Foreshadowing events to come later in the episode, J.J. comments on how everyone’s ass looks good except for Tony’s. I made a note to ask why J.J. was checking out the other guys’ asses but the question was answered by the end of the show.

Joe, the smooth talker from Kentucky, can’t seem to keep one of his testicles in his diaper and doesn’t try to cover it up to the delight of all. Kaitlyn laughingly says to him, “Joe, we just took our relationship to a whole new level.”

Joe, unwittingly coming across like Matthew McConaughey in Magic Mike: “I know, sweetheart.”

I have to say this about Joe. He may not be the best looking guy on the planet but damned if he isn’t confident and overflowing with southern charm. He definitely gives the impression that he’s had his share of the fairer sex and an experienced man can be a huge turn on for women.

The guys wrestle the smaller of the two sumo wrestlers. I’m not sure what the point was. All the guys get their asses handed to them in under ten seconds… except for Tony.

Tony, pre-match: “Normally, I’m a pretty peaceful guy but I don’t think these guys know who they’re f*cking with. I would be absolutely terrified if I were them right now.”

So Tony gets in the ring with the 400 pounder and starts slapping at him like a little girl. The wrestler is so surprised he doesn’t immediately take Tony down. He just laughs at him and lets Tony keep slapping him for a little bit. But the inevitable eventually occurs and Tony is not happy.

He gets up and storms back into the mansion. Kaitlyn follows after him to see if he’s okay. He completely ignores her at first but then, in true Kaitlyn fashion, she calls him out on it and he is forced to talk to her.

He spits out the “eyes of child, heart of a warrior, soul of a gypsy” line again then tells her he would much rather have done something peaceful and loving because that’s who he is.

Hey, Tony. Remember 5 minutes ago when you thought you were gonna bring down a 400-pound sumo wrestler by slapping him to death? That was so Zen. I’m starting to think Tony’s obsession with peace comes from his secret knowledge that just about anyone could kick his ass (and probably a lot of people have) so he plays the peace card to keep from ending up in permanent traction.

Tony: “I’m here for you, Kaitlyn. I really am. And I want to show you the multiple sides of me.” Cut from Tony’s face to his diaper-covered, pixelated ass. At least the editors of the show have a sense of humor about Tony even if he can’t have one about himself.

Then there’s a minor skirmish between J.J. and Tony. J.J. tries to “rescue” Kaitlyn but only makes the situation worse. Peace-loving Tony tells J.J. to “get the fuck out of here.”

Ian actually does come to the rescue and pulls Tony inside to chat. A little while later, Kaitlyn and Ian are up on the roof trying to calm Tony down.

Tony: “I really am here for the right reasons… I really have a lot to offer.” As if on cue, Tony spits over the edge of the balcony. Yep, I think that about sums up what Tony would bring to a relationship.

Kaitlyn tells Tony he doesn’t have to continue on the date so he opts out.

Next, the remaining five guys on the date go to Universal City Walk to show off their sumo moves (and their asses).

J.J. claims to have seen Kaitlyn checking out his ass several times. SMH. I think now would be a good time to mention that J.J. is sporting a bit of a dad bod.

Next comes the obvious. The boys are going to wrestle each other. Why am I feeling an overwhelming sense of Deja Vu?

J.J. says he’s going to “sumo the shit out of Joe” just before Joe tackles him to the ground. I think Clint beat the rest of the guys. We find out from Shawn in an ITM that Clint was a wrestler in school. Well, that explains it. Unfortunately, I don’t care enough about the sumo tournament to give much of a damn.

Back at the mansion, Tony’s still being a whiny b*tch about the sumo date:  “Can we please just go to the f*cking zoo?” No, Tony. The pandas would eat you.

After much scowling, fist-shaking, and pouting, Tony decides it’s time for him to leave the show. I’m happy and sad. Happy that Monday nights will require less strain from rolling my eyes at his moronicity but sad that I will have no reason to come up with further plant jokes to mock him with.

Tony’s thoughts on QUITTING the show: “I’m not a quitter. I’m leaving on my own terms.” His terms obviously don’t include the definition of the verb “to quit”.

In cold-blooded fashion, Tony murders one of his cousins by picking a flower for Kaitlyn from the hotel garden. He gives her the sacrificial bud before launching into his goodbye speech:

The other 5 guys on the sumo date show up to the hotel just as Tony’s leaving.

Next up: Clint turns evil and virtually solidifies my picks for the final four.